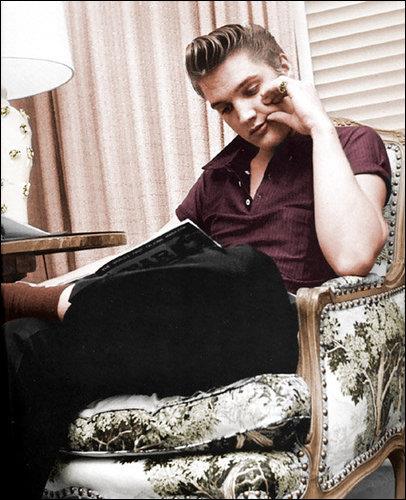 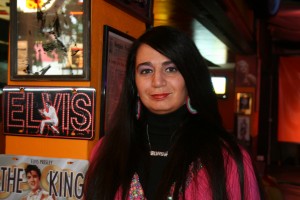 2. Age
Look at the picture and you will know my age.

4. When did you become an Elvis fan? When I was a little girl and my grandfather held me on his knees singing ‘Love me tender’. 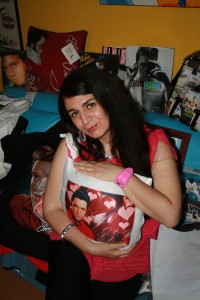 5. What do you like most about Elvis? I love his humanity, his generosity, his frailty of man and his strong relationship with God.I also want to emphasize his love for the children and respect for the women as a generator of life.Speaking of his great charisma, if you could compare it to an object, for me would be a magnet which attracts every thing and every person, even against their will.

6. What are some of your favorite Elvis songs?
Certainly ‘The Wonder of You’. In fact, this is the title I gave to my blog and my group on Facebook. More songs? Difficult to choose among the other 700 songs performed by the king I say “Loving You”, “Love Me Tender”, “The girl of my best friend”, “I Can’t Help Falling in Love”. But I could go on for all the songs he played. 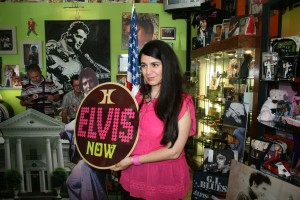 7. What are some of your favourite Elvies movies? “Blue Hawaii”: a very enjoyable film that makes you live a carefree holiday in a picturesque setting with a pleasant texture. I also suggest watching ‘Flaming Star ‘ for acting tough to Elvis. Finally, ‘King Creole’ with a young Elvis able to recite with great actors as Walter Matthaus and Caroline Jones.

8. If you could meet Elvis what would you say to him?
I would say “thanks for existing and thanks for giving us your music”.

9. What got you into Elvis in the first place?
When I saw the video of his performance “That’s the Way It Is” at International Hotel in Las Vegas (1970) and specially when he sang that sweet song that is “The Wonder of You”. From that moment I decided that his world would be mine and I dedicate myself to this with great passion to keep her memory alive.

10. Have you ever met any of Elvis ‘Memphis Mafia’ or his relatives? If so, what was that like?
I met Sonny West, Elvis’s bodyguard until 1976. It was pleasant to listen to the anecdotes and interesting facts on the years spent together. I liked that at the end of the long and emotional interview, organized by Fan Club Piacenza in Cortemaggiore (for news: www.elvis-pcevents.it), Sonny has acknowledged that there will ever be another Elvis. 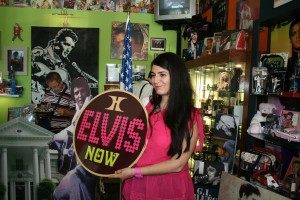 12. Did you ever go to any Elvis concerts if you were old enough?
No, unfortunately! I’m too young. When Elvis sang I was just a little girl. I’ve seen the images of the concerts in the tapes and and I realized how nice it would be there.

13. What was your favorite outfit that Elvis wore ?
It’s extraordinary his white and red dress called “Red Ladder” just the one he wore when he sang “The Wonder of you ” in concert ‘ That’s the Way It Is ‘ in Las Vegas.

14.What era of Elvis’ music did you like most ?
My choice is for the Gospel songs.

15. If you were old enough where were you whe he passed away and what did you do when you heard ?
I was a little girl when it happened. I could’t become aware of the tragedy that so many have lived.

16. What did you think of his marriage to Priscilla ?
Priscilla was the woman he chose and married. I think they were happy. Then over time had the problems that many couples have. Problems aggravated by the fact that he has become a busy star. I can’t know which one has neglected the other. In the end I think it was a great missed opportunity for both. 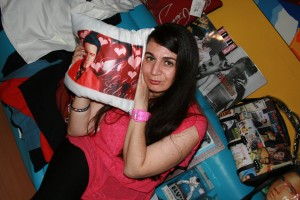 17. Anything else you would like to add ? Visit my Blog “The Wonder of Elvis by Marilena”   (http://thewonderofelvis.altervista.org/) and the Group in facebook with the same title. The Group is free and is a tool that allows all fans to exchange photos, videos, opinions, news and curiosities about Elvis and forge new friendships based on common interest. It isn’t enough. In Facebook you can also visit my page dedicated to his film career, “Elvis Movies by Marilena”.

You will not regret.
And so I recommend: always follow your dream !!!